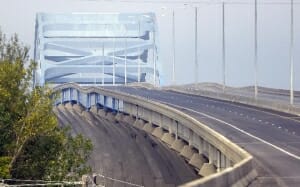 Thought: Infrastructure is desired most when it is wanted but does not exist. Once built, infrastructure’s greatest appreciation occurs when it is suddenly unavailable. When infrastructure exists and is available, we think little of it. This is the case in the Leo Frigo Memorial Bridge today.

The Leo Frigo Memorial Bridge opened to traffic in October of 1980. At 34 years of age the span is not as old as most bridges in the US. The average age of bridges in this in this country is closer to 50. The bridge suffered a partial collapse before sunrise in the wee hours of Wednesday morning, September 25, 2013. Drivers noticed that one of its bridge piers sunk nearly 2 feet unexpectedly. When the bridge was built it was the largest bridge in Wisconsin. Today, the crossing no longer holds the title but is the biggest bridge in Green Bay. The span is a part of I-43 and carries 40,000 vehicle trips a day. Recently the structure was overhauled with new joints, resurfaced deck and repainted steel girders. Today, the bridge is closed indefinitely – the official word is that it could take months – or a year to fix. The cost to the public – incalculable.

“This is not a bridge failing – the bridge is settling – it is a settlement problem, not a structural problem,” explains civil engineering professor Mark Meyers of the University of Wisconsin. “The bridge is 34 years old – I remember when it opened and cut 30 minutes off of West to East travel across the Fox River,” boasts a proud engineer. Meyers dismissed the problem as a civil engineer can, “Hey – in the end it is a Geotech problem.” Officials concur saying the bridge was deemed structurally sound.

A recent $17 million reworking of the I-43 corridor which includes the Leo Frigo bridge, did not reveal the stresses from a weak soil deposit below the faulty column identified as Pier 22. Disruptions are going to be  severe to commuters and commerce. The bridge is the vital link between Green Bay and the other Lake Michigan cities along in the lake. The sagging bridge spans the Fox River, creating a hazard to vessels ocean-going vessels navigating the water below the crossing. Worst: the Leo Frigo is a part of the US Interstate System – the trunk line of all transportation for the city of Green Bay, the state of Wisconsin and the entire nation.

The Leo Frigo Memoria Bridge didn’t fall into the Fox River. However, her deck is empty – too dangerous to pass over. Commerce is suffering. Jobs are impacted – some might be lost. Money and time spent on finding alternative routes goes down as wasted time. Fuel is burned unnecessarily. The calamity appears to be one of a rare, naturally occurring, shift in soils beneath the Fox River. Natural or manmade, when a bridge is suddenly out, the Governor addressees the public and work crews are pulled off important jobs. Disruption reigns. Hundreds of thousands of peoples’s lives are impacted.