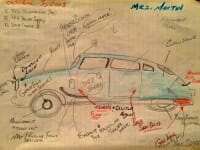 Mrs. Martin is what we’re calling our 1949 Hudson, Commodore 8. She’s demanding of our time. She’s takes our money. She refuses to be rushed. The challenge: it’s time to hit the road.

It’s Thursday, October 3rd. Per and I are heading Westward in what feels like ten minutes from now – this Saturday. We’ve gone though our list of Mrs. Martin’s demands. The last of the punch list we’ll perform in Per’s garage here in Boston are: Plugging leaks in the gas tank (now on the floor of Per’s garage) with epoxy, ponder what to do about clutch fluid that’s weeps from the transmission, and install seat belts in the back seat that I removed from our 1951 Pacemaker yesterday.

Bittersweet is that we’re taking much of our loyal Pacemaker with us having transplanted it’s straight six, 232 cubic inch engine into Mrs. Martin at the end of August. We’ve also taken the Pacemaker’s hood latch, spare tire bolt, radio, headlight, spare rim and lug nuts.