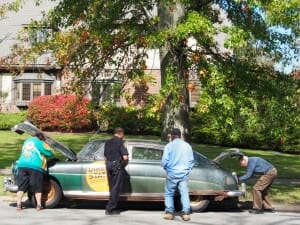 Yesterday Per and I took Mrs. Martin to a brownfield site in Youngstown, Ohio. We broke down in downtown before we got to the river where the brown sites turning green sit. We met folk wanting to help us in an all American way. Love Youngstown. While Per worked on points, coil and plugs I spoke to John Cox. What  a man. He works for the Department of Streets.  Loves his town – born there. When John saw the Hudson give out in an intersection and me pushing Per to the curb he came and shouldered our burden by putting his muscle into the effort. We got into it about rebuilding America. So too did his friend, the coolest police officer I’ve ever met – red hair up in a bun, pink watch and pistol on her hip. Then, another police officer and a street sweeper driver and Stephanie a passer-by-er. We had our own grass roots meeting on the bad streets of Youngstown.