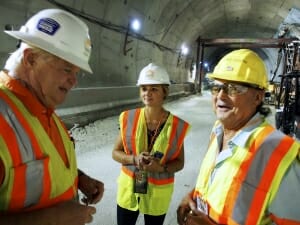 10-23-13: Miami, Florida: Chris Hodgkins (left) is an underground man if there ever was one. He digs his tunnel project known as Miami Tunnel. Chris is in charge of communications for MAT Concessionaire LLC. (Miami Access Tunnel) the private consortium building the underwater wonder. To Hodgkin’s left is Christy Zweig, reporting for CENews. Joining us on tour is Miami city resident Fred Joseph in the yellow hard hat, who helped raise $50 million in funds for the project that he feels, “..makes Miami an even better place to live.”  The tunnel is a nearly $700 million undertaking that removes heavy truck traffic from the city’s streets are destined for the Port of Miami. Joseph is empahtic when he said, “These trucks are dangerous. We don’t want them on our city streets anymore than they want to be there.”  Hodgkins chimed in, “Miami’s port will be the only US port that will have a direct connection from the Interstate System

[I-395] without a traffic light.” To the point: Congestion for the freight and cruise line passengers is reduced. Life in Miami is good for visitor, residents and businesses.
By Dan McNichol|2017-07-31T21:03:22+00:00November 3rd, 2013|Post, Uncategorized|Comments Off on Underground Man