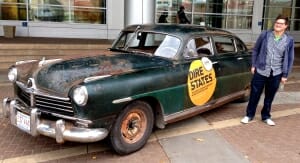 Madison Wisconsin: 11:04:13: The newly constructed, super-large, Engineering Hall at the University of Wisconsin was a standing-room-only crowd for the Dire States talk. This thanks largely to the intense crowd sourcing  efforts of Professor David A. Noyce, Ph.D., P.E. The academic is renown moving traffic with intelligent systems. I didn’t know that besides trucks, buses and autos his traffic directing included: powerful appointed officials, multi media sources, curious students. My friend, Professor Mark Meyers, knew this however, when he introduced us late this summer when the idea of a University of Wisconsin at Madison talk was first discussed. “Mrs. Martin,” he assured me after our initial meeting, “will be parked here” as he pointed to a busy sidewalk in front of Engineering Hall. This became truth the moment we pulled onto campus. Science Writer Scott Gordon, who doubles as a music critic,backed us into our parking spot before introducing himself. Scott successfully scheduled a Dire States appearance on Wisconsin Public Radio’s At Issue with Larry Meiller. Professor Noyce deftly worked with Case Construction Equipment out of Racine, Wisconsin, my partners on the Dire States tour, the American Society of Civil Engineers, the Governor Scott Walker’s Secretary of Transportation Mark Gottlieb, the secretary’s staff, and Professor Noyce’s esteemed colleagues on the university’s faculty. Audio visual support, simulcasting online, and most importantly people in the seats – thank you professor – thank you all.