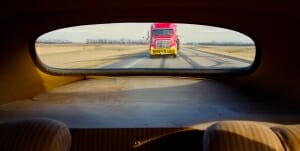 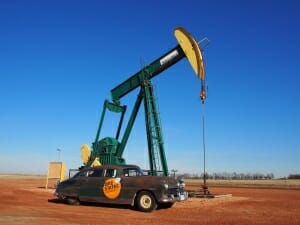 Engine running next to an oil rig in North Dakota

North Dakota: 11-14-13: Wild, western and windswept. Flat land, fracking and freight trucks. The population of North Dakota is rising. Life is good if you believe the happiness index that puts its citizenry amongst the highest in the nation along with California, Colorado and Massachusetts. Boston, Massachusetts, the small Northeastern city – big town, I hail from is as populated as the giant, square, Western state. North Dakota’s population: 699,628 (2012). Boston’s population: 636,479. North Dakota’s area: 70,700 square miles. Boston’s area: 49 square miles.

Energy management is this Dire States great hope – biggest challenge. Forever underpopulated, the state struggles to handle the trucking as oversized, over weight trucks hauling: sand, water, oil, pipes, chemicals and equipment. The big rigs barrel down back roads that are the state’s most main highways. Mrs. Martin’s hood latch was tested each time an oncoming 40 ton truck pushed 80 miles an hour headwinds. The thrusts of  upward air into the engine compartment popped the hood from its resting position with a loud bang.  “At a roadside restaurant in Wyoming, an elderly couple from Washburn, North Dakota talked freely about their state’s infrastructure challenges and energy boom. “You wouldn’t believe all the death on the roads,” chanted the presumed wife of the happily heavy-set man. “People are getting killed from all the trucks on the roads.” Her man agreed saying, “If they’d just build that pipeline there’d be 8,000 less trucks on the roads.” Referring to the controversial Keystone Pipeline he lamented, “Down in Gascoin

[North Dakota] they have big sections of that thing just waiting to be built.”  Regardless of their opinions, they were armed with statistics they believed true.

Infrastructure in North Dakota might mean less death and even more happiness. Divided highways and pipelines could simultaneously reduce truck traffic and head-on collisions. Small pipelines servicing oil platforms conserve natural resources currently wasted. Death lurks when giant tractors and trailers overtake lesser vehicles. North Dakota is the new Texas. The 2 states are the largest oil drilling states. Instead of flaring, the act of burning off natural gas to get to the oil, small pipelines running to-and-from oil drilling platforms could be – and sometimes are – capturing natural gases.

Flaring between Minot and Williston, North Dakota. I could feel the heat from the flame. Power platforms are unfenced – unguarded. Per here (video in IMG 1738) circled the flames.