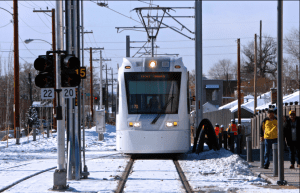 Salt Lake City, Utah: 12:4:13: Dire States rolled into Salt Lake City tonight from Denver just after both cities were hit with an arctic blast. I am speaking at an event early in the AM with a hundred contractors that my partner Case Construction Equipment put together. Just in time to see this new street car roll down the avenues. This new Sugar House transit system is opening tomorrow. So cool. Connecting condos to class rooms – Sugar House residential area with the University of Utah (someday soon). But love the idea of revitalizing a 100-year old “linear park” that demanded street car like action and not buses or faster trains. Check out story in Salt Lake City’s Tribune, the source of my factoids and image above.