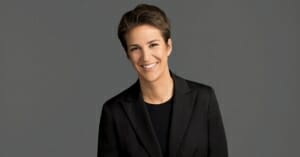 I like Rachel Maddow. Perhaps because she looks like my sister Meg. But, it is her tenacious stand on infrastructure that draws me. Clearly she gives a dam about infrastructure.

Rachel has a PhD in politics from Oxford. She has realistic take on how difficult a political pivot is for the United States to make on any issue – especially infrastructure – a position as encompassing as “everything” in our built world. Fascinatingly, she likes Ike . I am fan of Dwight Eisenhower too. I wrote a book about his Interstate System called, “The Roads That Built America.” I campaigned with Susan Eisenhower, the former President’s granddaughter to build smarter, better and faster. Susan, when I handed her a copy of my book, explained that her grandfather believed that is greatest domestic accomplishment was building the Interstate System. Powerful was hearing this from Ike’s flesh and blood.

Wikipedia’s entry on Rachel Maddow says, “Asked about her political views by the Valley Advocate, Maddow replied, ‘I’m undoubtedly a liberal, which means that I’m in almost total agreement with the Eisenhower-era Republican party platform.'”

Perhaps my sister in infrastructure will host Dire States on her TV and radio shows. I’d like to take her for a cruise in Mrs. Martin too. She’d appreciate the messaging I am betting.