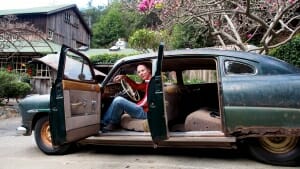 “Go low and slow,” said Mark Lewis as casually as is Californian. The night before I had parked the Hudson outside my cabin’s door while staying the night at Deejen’s Big Sur Inn on the Pacific Coast Highway. As I approached Mark he was smiling and gazing at Mrs. Martin. We struck an early morning conversation over her. The “dude” from England stays connected to California by driving up and down the Pacific Coast Highway with his wife Claire every year. “I always stay here at Deejen’s along the way. I’ve been coming here for 30 years. It’s one of my favorite places anywhere.”

The sun was barely up when we met. The Pacific air was scented from smoke from a morning fire in my fireplace and a still smoldering forest fire that laid waste to thousands of acres in the forest weeks earlier. Mark got the messaging of Mrs. Martin as rolling metaphor. He was nodding his head in agreement as I  delivered the sound byte about America’s infrastructure being as old, rusty and energy defunct as this original Detroit lead sled. “Totally. Right on dude. It is.” agreed Lewis, whose first was a 1966 Mustang, 289 V-8. “The bridges, the roads, they are rotting away. We haven’t invested in our infrastructure since the 1950s.”

This tourist in his town gets infrastructure – both civil and technical. Mark sees a direct parallel between investment and return on investment when it come to building systems. “In IT, you invest constantly or you die. Firms believe that they can coast after a big investment in their systems. Individuals do the same thing he says when the buy a laptop, “Oh, I am good for a while now. But everyday systems gets slower becoming obsolete quickly.”

The man, or should I say the dude, keeps it real. A kid from Santa Barbara, a town he calls, “God’s waiting room” where dwellers there are either, “Newly wed to nearly dead.” Mark grew up in LA and later San Francisco where he was a free lance photo journalist who logged time with Associated Press as a freelancer. “I studied film photography and now my entire education is for not. The practice is lost – completely antiquated.” He left photo journalism moments before the big disrupter known as the internet blew it up. One of his claims is he was one of the last shooters working using film. Mark says he would have had to made the switch to digital but there’s nothing better than film, a medium he uses for her personal photographic pursuits. Before another bomb called dot.com imploded 14 years ago, Mark got into the information technology world which took him to London.

The man has survived by seeing into big oncoming trends and major disruptions in technology. This is why I asked if we could stay connected. I hope to draw deeper connections between IT infrastructure and real infrastructure with his intuitiveness.

“It’s all downhill form here,” said the knowledgeable native as I described my route to LA. “You’ll be in Santa Barbara is 5 hours, and LA in another 2.” Claire chimed in adding, “But in this old car you’re going to need days not hours.” She gets it.