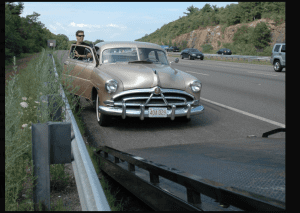 The National Public Radio interview I was doing was interrupted by an explosion – then a violent shaking of the old car. I wrestled the cracked 1950s steering wheel. The 60-year old lead sled was shaking madly, weaving between the superhighway’s painted lines. The old girl was wanting to dump all 3,500 pounds of herself into a tree lined ravine running alongside the right side of the road. Good that I installed seat belts before the interview.

The veteran correspondent, still wearing her oversized headphones was pointing her microphone – a thing that looked like a dead rabbit at the end of a stick – at me out of habit. She went silent. I kept talking.

I was trying to calm her – us. She was pale. Her mouth hung open. She began pumping a break pedal she wished existed on the passenger side. She watched me struggle. Her face said, “We’re going to die.”

We were losing speed as the blown tire dragged us sideways. A truck I had overtaken a moment earlier was beside us again. A sedan in the passing lane pulled back into a blind spot. An over correction with a hard pull of the steering wheel was as dangerous as letting the old car go where it wanted – in the ditch. Stopping in the center of the 4 lane highway was the worst scenario. I continued struggling.

The antique yellowed review mirror was for powdering a nose – painting lips. Now I was using it in life and death decisions. Looking over both shoulders, jerking my head side to side, I decided to make a crash landing in the breakdown lane. Did the trucker hovering nearby know I was in distress? Regardless, he was blocking my escape route.

More out of habit than proper warning I threw the toggle on the turn signal indicator. Crossing the truck’s path I knew the Hudson’s antique 6-volt light bulb in my passenger side tail light, no better than crummy flashlight, was worthless in the late morning’s sunshine. I ordered my conscripted copilot to brace herself. I punched the gas.

The Hudson was shaking like a World War II, B-17 bomber taking flack. Beginning my approach for the emergency lane I had a sobering recollection: Breakdown lanes along this stretch of the overcrowded Route 128 are used for high speed travel during commuting rush hours. Unsuspecting out of state motorists with mechanical failures had been murdered along this road by mad men speeding between work and home.

We came to a halt at the end of a steel guardrail. As if the car was on fire I pushed as much as followed my crew out of the cockpit. We made it to the safe side of the highway barrier. Haunting me was the unanswered question: Was the stretch of road we were standing on a high speed travel lane or an after hours breakdown lane? I dialed AAA.

While waiting in tall grass for the wrecker, the host I was hosting continued her interview. She assured me that the crisis was going to make for good radio. Keeping her word the prime time piece aired with the blowout captured for listeners. All of it was a bad omen for tomorrow’s highway.