The Great Recession wiped out my work, my nest egg and my marriage. With a tad of hope and a ton desperation I turned to a friend. “Per Christiansen, pronounced like the fruit,” is how he introduced himself a dozen years earlier when I showed up at his garage with a project car in tow. In a coffee shop in Boston in early 2010, we agreed to circumnavigate America in a an old car. 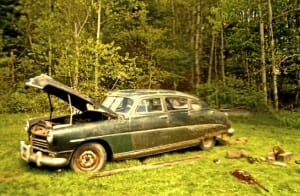 Crisscrossing the United States of America in our shared 1951 Hudson, we had already logged over 50,000 miles. Since we met I’d been asking Per a question he refused to answer. Finally, on a long stretch of empty road on the high plains of Nevada he spoke up, “I’d say the 1949 Hudson Commodore 8 is the car I’d most like to have.” There it was – Per’s dream car. But why was the 49’ seducing him – a  hopeless romantic of rusty rides. The man born in 1936 admitted to having at least 150 cars over a lifetime. A lot of autos for a man confined to a teacher’s wage.

Per is the Hudson Whisperer. He can rehabilitate any automobile on earth. So why a 49’ Hudson Commodore 8?  Turned out Per had been living a life unlived. As a reckless 30-something in 1960 Per wrecked his 1949 Commodore on an icy bridge in rural Connecticut before he had time to fully indulge himself in the ride he had fallen for.

By January of 2011, after stalking 49’s, Per came across one we might afford. Cheap meant the vintage auto was a mechanical disaster. The 1949 Commodore 8, a Detroit original, had over 800 peeks according to eBay. Buyers remained reluctant. Bidding was non existent. The wreck was being passed off as a barn find. We decide to drive 200-miles to  take a look. On a snowy Sunday in February, 2011 we drove westward out of Boston on The Big Road. Per calls all superhighways The Big Road.

Stamford, New York is a Hudson River town where the population is as white as the village’s famed hen eggs. The chicken farming town’s population of a two thousand   hasn’t changed since the Civil War. A half century earlier, when the old car we were seeing was new, nearly every road in Stamford was a dirt road. Turns out the roads are like the census – unchanged. On a dead end, along a road of red clay, we cross a creek that our map tells us is the Western Branch of the Delaware River. Bullet holes in the door of a junked 1950s Chevy pickup abandoned next to the Hudson we’ve come to see is cause for pause. A knock on the farm house’s front door reveals an elderly woman whose name is Mrs. Martin.