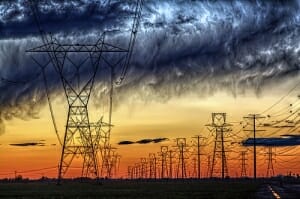 Corridors of Power: America’s grid is old. Too many of the nation’s electrical systems and pipelines date back to the 1800s. Electricity demand has increased by about 25% since 1990 while construction of transmission facilities decreased by about 30% according to the American Society of Civil Engineers.

Super Storm Sandy nearly wiped out New York City’s grid. Our fragile power infrastructure is under constant cyber attacks. Gridlock is another big challenge to the grid. Like is the case with much of our infrastructure, minimizing jam ups in the system is the challenge to be topped. Getting right-of-ways to build new high tension lines, pipelines and other corridors of power, remain the key to success.

There are 5,200 power producing facilities in the US. Of those, 2,000 public utilities are run by states and local government agencies that provide about 15% of the power we use. 213 stockholder-owned utilities provide power to about 73% of the population. 930 electric cooperatives providing power to about 12% of the population. Additionally, there are nearly 2,100 non-utility power producers, including both independent power companies and customer-owned distributed energy facilities.