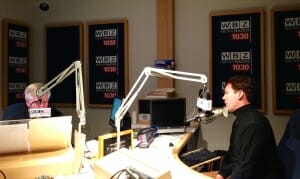 Dan Rea doesn’t suffer fools. Boston’s media legend, winner of Emmy’s, nominee of many more, and collector of honors and other awards hosted me on his talk radio program NightSide. Dan’s journalistic prowess and self determination cleared a man who’d been wrongfully convicted of murder. He digs in.

So, when Dan came down a long hallway at the station a few minutes before our appearance at 9PM on Friday night, the eve of the Dire States tour send off from Boston, I was impressed. One that he came down to greet us himself. Two that he laid down the law. “What are you all doing here? Who’s who? You, what’s your role? And you and you?” After Per explained when Dan’s finger pointed at him, “I keep the car going” and Bill Elverman, my publicist explained he was with Case Construction Equipment, the sponsor and I told him I was his guest per his producer’s request, we passed through his gate. But not before he said, “You’re the only one speaking,” pointing at me, “I’m not hosting a choir.”

The show lasted an hour. Dan was gracious – even polite – always firm. His listeners like him. Callers called in to debate, complain and question infrastructure in America. Bill and I were pleased hearing Dan continuing on with the conversation in our wake. After we left he plugged Dire States and its microsite. Pleased was I. Especially thinking he was going to refuse us entry into his sound chamber.

We had our first public conversation. It lasted beyond the last call. And most importantly, it was robust.