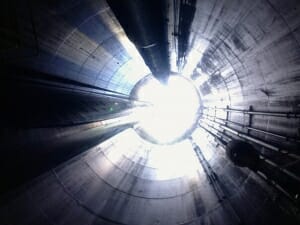 11-1-13: A Dire States tour team was lowered 250-feet into the $190 million Deep Rock Tunnel Project. Currently workers have dug 4-miles into the earth beneath Indianapolis, Indiana. At the bottom of the entry shaft I reached my hand out of the protective “man cage” that the group was lowered in order to snap this image. I was lucky when I blindly pointed my smart phone’s camera upward. The man cage, a yellow steel box that looks like a shark cage, acts as the elevator cab taking tunnelers down 250-feet below the cornfields of Indiana. We and it dangled from a large crawler crane operated from above. Once workers reach the bottom of this shaft, they have a 4-mile journey through a 20-foot wide tunnel to their job-site where a giant boring machine digging at world record speeds awaits them. The boring machine is only halfway done with its work. There’s still another 4-miles to go. Each worker travels on the Deep Rock Tunnel train they call the “Loci,” – as in locomotive. Moving at the pace someone walking, the train ride from the shaft to the boring machine takes 2-hours. That’s a 2-hour commute after they arrive to work. Life is strange at 250-feet into the earth.