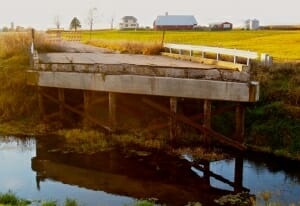 Dekalb, IL: 11:06:13: A 3700 percent return on investment for replacing this bridge makes Google stock look like a low yield investment. Yet, that’s what experts and academics calculated the return on investment would be on each dollar invested in pulling this broken bridge out of the creek that it’s been sitting in since it collapsed about 5 years ago. That’s $37 for each $1 invested in resurrection. Returning it to the farmers and community folk who are forced to drive an hour out of their way every time they’re not able to cross it should’ve been the immediate course. Imagine being in an auto accident in 2008 and still not having your car repaired or replaced today.

While visiting the structure I photographed this school bus drive up to the collapsed bridge, drop a child off at the farm house and then turn around and head back to where it came. Why has this bridge been left in a heap in these soybean fields? It’s a public structure that served a public purpose since it was built in 1976 yet it remains to be rebuilt. I was informed that litigation is holding up its rebuilding. If so why not settle on who owes whom what later? Punishing those who paid for the bridge is cruel. These people are being deprived of the structure they came to count on – and paid for. Each bushel of soybeans in this area now costs each farmer an additional 5 cents because of the nearly 17 mile detour every truck carrying their goods to market must endure. The supply chain remains broken. That’s a burden on any farmer, large or small. And the supply chain between Dekalb, Illinois and the Peoples of Republic of China, Brazil or any other country waiting for this nutritious bean is that much further from these farmers.