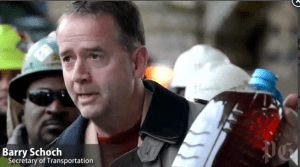 11:26:13 “Think about the cost of doing nothing,” said Pennsylvania Secretary of Transportation, Barry Schoch as he held up a gallon of gasoline to the cameras at a media event under the rusting Liberty Bridge in Steel City, Pittsburgh, Pennsylvania. “So for the cost of this, 5 years from now, you can see this bridge get repaired. You can see thousands like it across the state get repaired. You can see upgrades in our transit systems. Or, it could have been the cost of doing nothing. That cost would not go away. It would simply get higher if we did not deal with it now.”

At the invitation of Dan Hawbaker, owner of GOH Construction out of State College, PA, I shared the stage weeks ago with Secretary Schoch. We were speakers at the city’s Chamber of Commerce’s meeting. Schoch is impressively tall, quick minded, and I am guessing, is an individual who doesn’t suffer fools. Rare among today’s elected officers are his political acumen and professional engineering discipline. Too unusual is the trained engineer who’s a political leader. We’d be in better shape structurally if more engineers worked to become politicians. A hopeful outcome would be the building civic integrity by way of smart infrastructure investments that would reduce political instabilities. Engineers have their limitations. Linear thinking is not one of them.

“There is only one Pennsylvania. We all share its roads,” emphasized Governor Tom Corbett, above the dull roar of traffic at the press event beneath the Liberty Bridge. He’s Secretary Schoch’s bossman. The chief executive put the breaking of political gridlock over the passing of the the Commonwealth of Pennsylvania’s transportation bill into a sound byte, “This was a reasoned, common sense approach to how to deal with a terrible infrastructure problem that we’ve had.”

I would say still have. Time and money can solve almost any infrastructure problem but the work has yet to begin. The pundit’s are wondering if the Governor acted quickly enough. Regardless, Governor Corbett just announced his re-election bid.