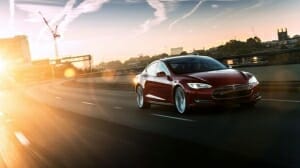 Crescent City, California: 12:14:13: Cannot help but to think of cars when in California. People here worship them new and old. The road here: magnificent.
The future of the American road depends on innovating firms like Tesla in order to reinvent the road and how we use it. America’s road infrastructure is unmatched in the world. For roads to have as bright a future as they have had a past technology will have to intervene. Electric car technology has great promise. Tesla is the American standout.
The automobile and the road have always had a yin & yang relationship. The road was all but dead with railroads as the king of transportation until the late 1800s. When the automobile was invented it was called the horseless carriage and it gave roads new life. As roads improved so too did cars. As cars improved, demands for better roads grew louder. My 1949 Hudson is a living example of that past. It is America’s first low rider, first lead sled, that was designed for the nearly unheard of superhighway yet to come.
The USA has 4 million miles of road with 64% paved. Every state in the United States ranks roads as the number one concern regarding infrastructure. Currently, however, investment in roadways is hundreds of billions short of what is needed. When my 1949 Hudson was built, the United States led in automotive technology. Today, we are living in the past. As strange as a horseless carriage was is how strange a driverless car is. Soon, with the help of Tesla, driverless electric cars are the future.
By Dan McNichol|2017-07-31T21:03:15+00:00December 14th, 2013|Post, Uncategorized|Comments Off on Driverless Cars vs. Horseless Carriages