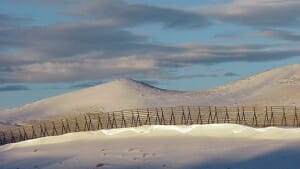 1:2:14: Snow fences in Wyoming are remarkable structures if not mysterious. The state puts forward significant outlays of lumber, cash and property in order to keep I-80 open to traffic during the winter. Snow fences in Laramie, Wyoming are legendary. This is where I-80 was built against the ancients, Native Americans who knew the Big Road should not never have been built in the area. Old locals knew better as well as a serious snow channel in the form of a natural snow and wind tunnel punishes the area so much that the rail road companies were prevented from laying down tracks there decades before. But tragically the builders of the Interstate System ignored the counsel of sages. Many deaths over the past half century  along the route are due to fierce storms and snow. The section of highway is notoriously called Snow Chi Minh Trail. Talk came to relocating I-80. Then came the storm fences and now the green fences. The mater mind behind the structures is a little known about engineer.

Check out this story in Slate that talks about Dr. Ron Tabler, a snow wind engineer that innovated by chasing snow storms and collected data in order to save lives not to mention tons of money from not having to plow as many tons of snow and ice. Airports use structures like these to keep runways open. There are even tumbleweed fences to keep the drifter off the roadways.

Months ago, as I drove through the are I noticed evergreen trees replacing some of the built structures/fences.