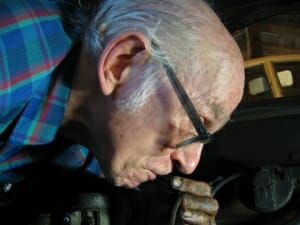 Per is the Hudson Whisperer.

I was trucking though the mountains of Western Pennsylvania towards Massachusetts in a hastily rented U-haul rig. It was a crisp October morning in 2003. Yellow, orange and red leaves splashed the deep blue morning sky. I was high spirited regardless of unexpectedly having to tow my just purchased but broken Hudson.

Desperate I began dialing members of the Hudson Club for assistance from a thick roster I pulled from the old car’s glove box. Larry, the previous owner, told me where to find it. The bastard knew I’d need it.

“If you breakdown anywhere, these folks will help you out. They’re good people. They’ll swap out your water pump and put a plate of potatoes in front of you.” True of them I’ve discovered, but not of him.

Larry, playing the part of an affable farmer that was too old to keep driving his prized Hudson, assured me I could drive “no problem” from his farm in Ohio back to Boston. Taking my $7,000 cashier check he patted me on the back. Waiving goodbye to each other, I eased the Hudson down his long dirt driveway.

A few miles from his mailbox I had my first breakdown. Loosing locomotion I pulled onto the shoulder of the highway. An intense clicking came from the gas tank followed by coughing, wheezing and the engine’s failure. It felt like I’d run out of gas but I’d just topped off the tank at a Texaco Station near the onramp to Interstate 70.

In a bed of stiff hay on the side of the Big Road I laid in wait against a farmer’s fence. The fall morning sky was clear. The sun was hot. I’d passed along this stretch of the Interstate many times driving between Philadelphia and Springfield, Ohio where my alma mater Wittenberg University sits about fifty miles down the road. In my four years there I had heard much of the The National Road, America’s first interstate highway that launched pioneers plying their way West. Springfield was the last town for the famed road running parallel with this part of I-70. I was stuck in history – an old car on an old road.

I was clueless about cars – foolish for buying this one. All day, as the car stuttered, stalled and died every 20 miles I’d call old Larry from the shoulder of the road. All day be blew me off. Hitting the Allegheny Mountains it was clear that pushing on this way was dangerous. Jagged rock faces leaned into the breakdown lanes of the mountain passes of I-80. God looks out for fools and drunks. I found a U-Haul rig in a nearby town. The operator for the rental company said it was the last one large enough to tow a trailer big enough for my big ass lead sled I know owned.

“Per Christiansen, lives near me” I thought out loud. More importantly was a notation, an icon of a wrench next to his name indicating a wiliness to aid the mechanically challenged – me.” Dialing and driving a the truck, trailer and broken Hudson I listened to a strange salutation on a vintage answering machine. “Please leave a message” echoed in my ear. I began my S.O.S. “Hi. My name’s Dan McNichol. I live near you in Boston. I’m an author of books on roads. I’ve just finished writing a book on the Eisenhower Intestate System. I bought a 1951 Hudson to do a national book tour but it broke down in Ohio. I need to get the car ready for a drive across America in a few weeks. I’ll be in Boston by the end of the day. I was wondering if you…” “Hello? Hello? Hello?,” interrupted the now live version of the voice I had just heard on tape.

Per screens his calls. Hearing “Hudson” I later learned, opened the man’s garage door to me. “Per. Pronounced ‘pair’, like the fruit,” corrected the wise man’s voice.  He was stern. I was desperate. It was the beginning of an important relationship spanning many years.