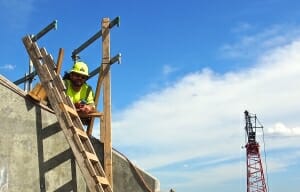 Jeremiah, a state employee for the Commonwealth of Kentucky, took his civil service to a higher level by securing Low & Slow crew members accesses to the Ohio River Bridge Project’s construction site after we were denied by a subcontractor on the project. His actions led to a cover story in ENR featuring the work his fellow bridge builders have dedicated themselves to completing. That day in May Jeremiah performed a double duty as overseer of construction and an impressive manipulator of media.

Jeremiah made it his mission to get us to the top of the bride tower. He believed in what the Low & Slow tour was attempting to do: Spread the word about the need for critical infrastructure. Sadly, he had to perform double duty by correcting the actions of  the contractor whose core mission it is to assist the Commonwealth of Kentucky and the state of Indiana in making the media aware of the project’s progress, challenges and successes. Jeremiah chose to act with conviction by clearing us, through proper channels, for a photo shoot at the top Louisville’s newest icon. This behemoth bridge project turned into a cover girl for the engineering world to admire and the region to celebrate.
Instead of being offered professional respect as seasoned journalists we were dismissed as grade schoolers by a contractor paid to be the project’s PIO. This person was duty bound to disseminate information that we sought. Her actions felt treasonous. We were seen by her as a liability – a part of the problem. Instead of being proactive and helping us showcase the public’s project delivery system as a possibility for the rest of the nation to deploy on their civic endeavors, she stymied us. Worst, she threatened to deny the scores of dedicated professional’s working on the bridge credit for the good work. Poor performances like this prevent other’s attempting to do the same from benefiting form shared information.
As a former spokesman on The Big Dig, I am certain the world would be a better place if there were more dedicated men and women like Jeremiah working on mega public projects. Making America aware of the need for better critical infrastructure is the key.
By Dan McNichol|2017-05-12T14:11:08+00:00October 15th, 2015|Post|Comments Off on Double Duty Dude