Let’s look at the megillah – the whole picture – of America’s failing infrastructure: Critical US systems are silo-ed – especially by experts. Laymen depend on professionals to see infrastructure wholly: water, waste, transit, energy, aviation, rivers, sewage, road, brown-fields, parks, schools, levees…
I spent the past 3 years touring America’s vital systems in a beat up 1949 Hudson advocating, “America’s Infrastrucure is as old, rusty and energy defunct as as my original Detroit lead-sled.” In 2015, on the last leg of the odyssey, my sponsors, the American Public Works Association and Engineering News Magazine (ENR), crossed the nation with me one last time, for a total of 15,000 miles in my wrecked Hudson. As an author on complex systems (The Big Dig, US Interstate System, American Byways & Highways) and journalist in engineering and construction I’ve documented these system failures.
Encouraging discoveries – our weak links should be shared while moving forward together. 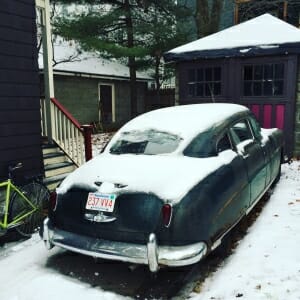